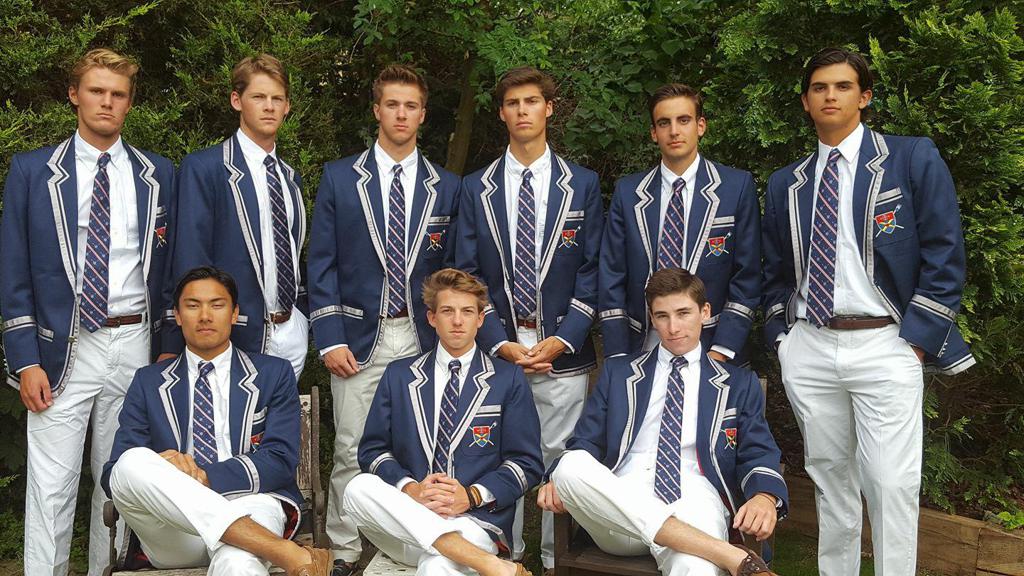 The St. Albans Varsity 8 made the leap across the Atlantic Ocean to compete in the Royal Henley Regatta in the Princess Elizabeth Cup. This regatta features some of the best rowing from all over the world. Olympians, universities, club and high school crews compete in a variety of events. The Princess Elizabeth Cup, known as the PE Cup, goes back to 1946 and is for high school eight-man crews where none of the rowers have reached the age of 19 during the regatta. In recent history, our chief competitors from schools like Gonzaga, St. Andrews and Dallas Jesuit have competed in this event. Historical powerhouses from the UK such as Eton, Abingdon, and St. Paul’s have dominated the PE Cup in the last decade. The last American crew to win there was St. Ignatius from California in 2005. St. Andrew’s DE made it to the final in 2011. The closest local team to win the PE Cup was Washington Lee from Arlington in 1964 and 1969.

The Henley Royal Regatta is a race like no other and very different from our typical spring races. The Henley course is 2,112 meters long and pits two crews against each other on a narrow strip of the Thames River. Our races are usually held on 1,500 meter courses with six boats lines up against each other. Races in the States are usually attended by parents alone. The Henley is a nationwide event where thousands show up to eat, drink, and discuss every move of the athletes while adhering to a strict dress code. Drones fly overhead capturing spectacular video that is displayed live on the Internet along with expert analysis. The event is limited to 32 competing crews. There were 38 entries in this year’s PE cup so we had to enter a qualifying race a few days before the actual regatta began. Anyone can sign up for the regatta, but not all are guaranteed a spot.

Discussions about entering this year’s varsity 8 in the Henley Royal Regatta began at the end of the 2016 rowing season. I felt we had a group of athletes who could compete with the best crews in the country and would represent the St. Albans community with dignity. They had a strong work ethic, good size and a desire to win. In conversations with the rowers, their parents, Athletic Director Gary Schnell, acting Headmaster David Baad, and International Travel Coordinator Mireille Beuchard, it became clear that there were some hurdles to cross but there was interest from all parties. The details were ironed out by March and the trip became a reality, launching the process of training and selecting a crew into full swing.

Fast forward to the end of the 2017 racing campaign. The boat that would represent STA in the UK had earned a bronze medal at the Stotesbury Regatta in Philadelphia and another bronze medal at the Scholastic Rowing Association Nationals in NJ. These were strong results but we had been beaten by Montclair High School of NJ three times during the spring. They emerged as the top US crew and they were also going to attend the Henley. Our crosstown rival Gonzaga also planned on competing. They placed second at Stotesbury. Other American crews attending were Episcopal, PA, The Haverford School, Kent School, Deerfield, and Tabor Academy.

We arrived in England on June 21 to a DC-style heat wave. We made the transition to a rented Empacher racing shell from Oxford Brooks University, got used to our accommodations, and began practicing on the Henley race course. The qualifying race took place Friday, June 23 and we successfully made it into the regatta. We then competed in the Reading Town Regatta a few miles down the Thames on Saturday, June 24. The boys won the Junior Scholastic 8 event and the Intermediate 8 event as well. The team was building confidence and racing savvy coming into the Henley which began on Wednesday, June 28. The regatta draw was posted on the 24th and we matched up against Norwich School in round one. As fate would have it, we raced Norwich at Reading and won convincingly. The race against Norwich went according to plan and STA triumphed by 3 ¼ lengths without pushing the gas pedal very hard.

In the round of 16 we drew Montclair. This crew had been two to three seconds ahead of us in three separate races but, on this day, the script was flipped. In a dramatic race, our boys raced level with Montclair for about 1000 meters and then steadily pulled away for a ¾ length victory. Physically and emotionally drained the boys rowed their most significant race of the year at a very high level.

At Henley there is little time for celebration. The next day (June 30) we would face Radley School of England. In a hard fought race the STA crew came up short losing by ¾ of a length. The Radley crew went on to make it to the final. Taxed from the day before our boys could not hold on to this experienced and savvy British crew who went on to lose to Scotch College from Australia in the final.

When all was said and done, the trip was a success. Our boys found additional speed from the end of the season. We learned about racing with some of the best athletes in the world and held our own. The parents who attended thoroughly enjoyed the spectacle of the Henley experience and the fans back at home got to see the St. Albans crew shine. Given the proper circumstances, I could see a return to this regatta with a hope for greater glory.