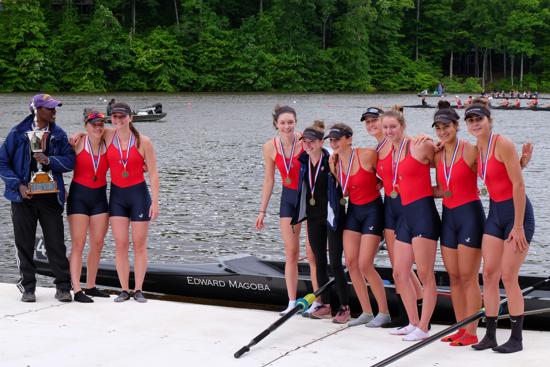 The Virginia State Championship was held on May 13th, where the first and second boats were set to defend their State titles from 2016. Facing some challenging conditions and headwinds, each crew went out and prevailed in both their heats and finals. The second boat was able to avenge its loss against TC from two weeks earlier, and beat them in a race that came down to the wire. The first boat won by open water. Ed Magoba, the namesake of our first boat, was coerced by the team to join them on the medal dock, and as usual, was all smiles and hugs. 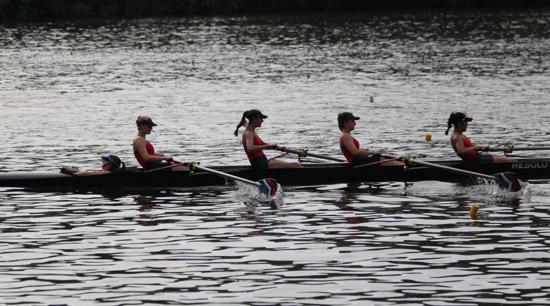 Next, the team traveled to the famous Stotesbury Regatta, the largest High School regatta in the world. The Junior Four (Annie King, Morgan Chung, Elena Aranitis, Juliette Van Vleck, Kate Mabus), put up an impressive 9th place in the time trial. This was out of 71 boats, and was the most highly subscribed event of the whole regatta. They moved on the semi-final where they were just edged out of making the final. This marked the best finish for a Junior 4+ in NCS crew history. 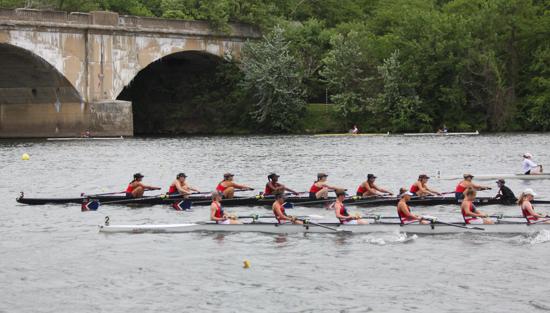 The Second 8+ or “Squadron” (Peyton Gordon, Sophie Bredenkamp, Grace Farran, Annabelle Rice , Elisabeth Sicoli, Naomi Davy, Lexi Novak, Anna May Mott, Caroline Garcia) placed second in the time trial behind BCC and moved into the semi-finals with a #2 seed. The boat worked through their semi-final with ease, and all qualifying boats from the semi-finals were within two seconds of each other in time. With purpose and determination, the St.Peter rowed a “hans” race, putting away the competition by open water. This marked the second year in a row that NCS has captured the Irish American Chamber Cup at the Stotesbury Regatta. 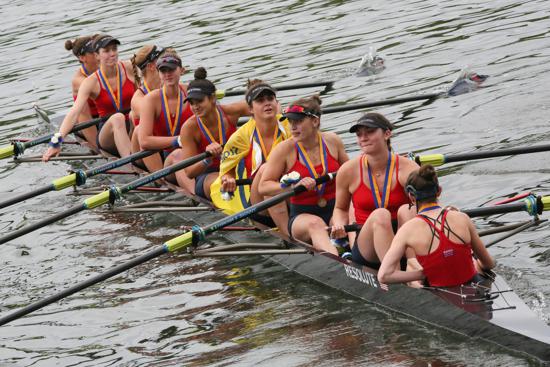 The First 8+ (Sophie Dunn, Camilla Ryder, Amelia Parizek, Serena Irwin, Hannah Yazdani, Eva Phelps, Sophia Donovan, Beata Corcoran, Rory Meyer) rowed a strong time trial and came out 0.3 seconds ahead of the annual Philly area rival Mount St. Joseph Academy. The semi-final was a challenging win, as conditions were not in the boats' favor. The final was incredibly competitive but the “Magoba”, fueled by the success of the “St.Peter,” pushed to a convincing victory over the field.  This was the first time in the regatta’s history that a girls team has won the first and second eight in consecutive years. 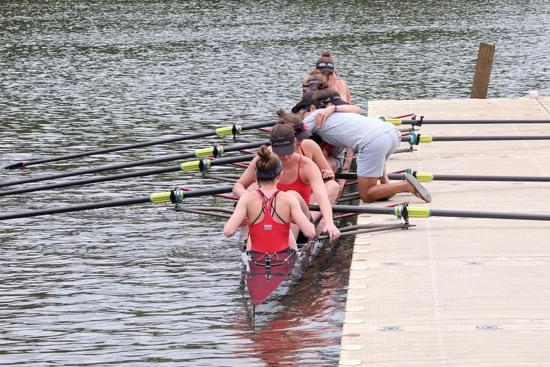 The first 8+ then traveled to Cooper River in Cherry Hill, New Jersey to compete at the Scholastic National Championship Regatta. Each boat that competes at the SRAA Regatta was required to qualify through their local championship races, so the level of competition increases dramatically and attracts teams from California all the way to Florida. The first boat was able to make their way into the final by winning their heat and semi-final faces. In the final, the crew put together a good race, but placed fourth. They were bested by the strongest teams from Florida, Chicago, and New York.  Overall, a great showing with some fierce and very strong competition, and marked the 6th consecutive year that NCS has been in the final at the National Championship Regatta, an accomplishment shared by only one other team in the country. Great season Eagles!