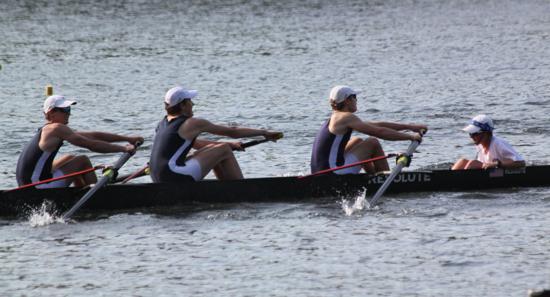 Opening the Stotesbury weekend for the CCCRC, the freshman boys aggressively raced the time trial and found themselves with the third fastest time in their event. In the semi-final, the boys found themselves in an incredible battle that saw them, BCC, and Gonzaga trading the lead down the race course. With the gutsiest performance of their season, the freshman were able to nudge out Gonzaga and earn a spot into the final. In the final, the boys unfortunately missed the break-away pack for the medals, but almost rowed down a very strong and large Dallas Jesuit crew and finished in 5th place. While the boys were understandably disappointed to not bring home hardware to show for their efforts, their ability to make the final against teams that are larger and more experienced bodes well for their potential and the impact they should bring to the upper boats over the next three years. 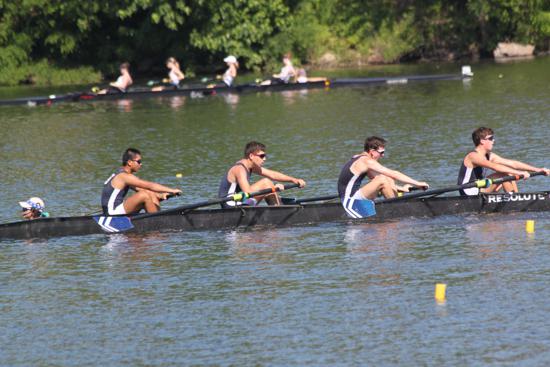 The boys in the junior 4 came into the regatta with a solid showing at the VASRA championships. The junior 4 category is typically one of the most competitive categories in the regatta. With 57 entries, this year was no different. Many teams will put their best athletes in this race. Our boys came in 14th in the time trial and then ended up last in their semi-final. A broken seat did not help their progress at the end of the semi-final; however, I am pleased with the progress this crew made over the course of the season. With a novice and a rotating lineup they made gradual progress from week to week. These boys gained valuable rowing skill through the 4 and I see them filling in seats of the upper boats next year. 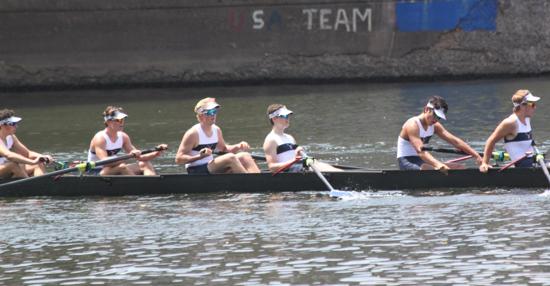 The 2nd 8 had a strong showing at the VASRA championships, but we knew they would have a strong challenge to make it to the finals at Stotesbury this year. Coming in 8th during the time trial made the task even more challenging. A few missed strokes at the end of the trial probably cost them about 2-3 places. However, the 2V had its best race of the season in the semi-final, beating BCC and Fordham prep to make it into the final. In the final, our boys got outgunned by an impressive Gonzaga 2nd 8 and ended up in 5th place. Although disappointed not to score a medal, our 2nd 8 accomplished much over the course of the season. It is a young crew that is hungry to make an impact on the 1V next year. 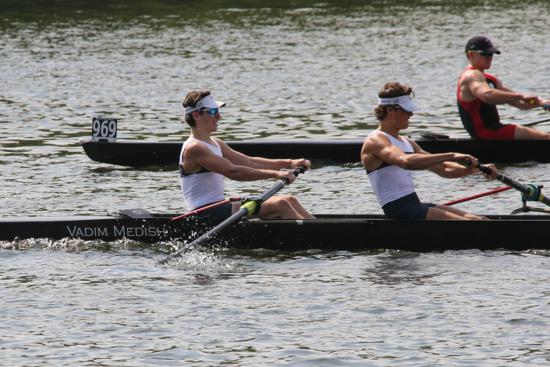 With a good win at VASRA and some impressive practices leading up to the Stotesbury, hopes were high for the 1V. The opening time trial was less than impressive. The winds ebbed and flowed over the course of the opening round leading to some curious results. Our 7th place finish set up a semi-final showdown against top ranked Gonzaga and a strong LaSalle crew. The implication of 2nd place was ending up in the dreaded lane 6. The choice was obvious. We needed to attack the race with full intensity and win. With a great start and a bold middle our 1V beat Gonzaga by 1.6 seconds and was a full 8 seconds ahead of LaSalle. The time of 4:13.1 was the best time of the day, and the confidence of the crew rose greatly. Unfortunately, that same result could not be replicated in the final. Montclair used a powerful move at the 500 meter mark to move to the front of the pack. Gonzaga rowed a heroic race out of lane 6 and pushed into second. It came down to a three boat race and Montclair held on to win and Gonzaga captured the silver. Our boys fell to 3rd and received their medals without elation. The 1V will get another shot at Montclair on the Cooper River in NJ at the SRAA Nationals. Gonzaga has decided to skip this regatta and prepare for the USRowing Youth Nationals and then Henley. Our boys hope to come out on top in our final US regatta. They will get a strong challenge from Montclair and New Trier who come in trying to defend their title from 2016.