Combined Cathedral Crews Rowing Club is excited to welcome Jonathan Crist as the new NCS Head Coach for the 2021-2022 season. Crist comes to NCS after over a decade of experience coaching junior and collegiate athletes, from Pittsburg to Oregon to North Carolina and finally Florida. After coaching for such prestigious programs as Three Rivers Rowing Association, Rogue Rowing, Sarasota, and UNC Chapel Hill, Crist will bring competitive fire and expert coaching to the hardworking NCS girls.

I had the opportunity to sit down with Jonathan Crist before the start of the season to discuss his rowing background, his coaching philosophy, and his plans for success with this girls crew. I asked a little about his background in this sport, and he told me that he found rowing at his high school, joining the Central Catholic Crew team his sophomore year. Although he did not row in college, that is where he began his coaching career, and subsequently realized his passion for coaching this sport.

As a senior in high school, Crist attended Valley Forge Military Academy. Upon asking if this unique experience informed his coaching philosophy, he responded that he learned about “type two fun,” the type of fun where the payoff is the reward, not necessarily the act itself. Furthermore, he said that Nike’s “Just Do It” contained more wisdom than it seems. Sometimes rowing is just about showing up and getting it done. This is the core of Crist’s coaching philosophy, which he separated into a few categories: grit (the love for long-term goals and “chasing the perfect stroke”), resiliency (“the ability to get back up”), and competition (which aims to lift others up instead of knocking teammates down). These three pillars, in combination with his phrase that “we learn to become better humans by making boats go faster,” have led to Crist’s immense success. He has championed the men’s high performance U17 eight to a Club Nationals championship in 2018, and his fours went one two and three in the U17 4+ event. Crist noted his 2018 Club Nationals run as one of his most memorable regattas, but not for the reasons you might think.

“The results were fun,” Crist acknowledged, “but the joy [these boys] had for the sport and [their] love for competing was what made [the regatta] memorable.” Indeed, the other two regattas Crist mentioned as memorable were because of his athletes’ performances, their love of the sport, and their progression during the season which led them to these particular regattas. For both his crews, just an appearance and race at the 2019 Youth Nationals and Head of the Charles were huge, “blazing a new path” for his programs and showing his teams what is possible. It is clear that Crist is excited to help National Cathedral Crew reach new levels and blaze a new path under his guidance.

A former coworker of Crist’s further pointed out that his strengths lie in “his communication skills and his constant desire to learn.” Indeed, Crist suggested that his PhD in rhetoric allows him to use language more effectively, and knowing when to redefine terms such as win and loss to fit the goals of the team. “Losing is a part of the process,” he said, “failure can simply mean trying something different.” His redefinition of failure, in combination with his emphasis on trust between teammates and healthy, uplifting competition, will push NCS rowers to new limits, allowing them to take risks on the erg and water in order to improve and become a faster crew.

Thank you, Jonathan, for taking the time to speak with me, and welcome to NCS crew. We are so excited to have you, and look forward to seeing you on the dock. 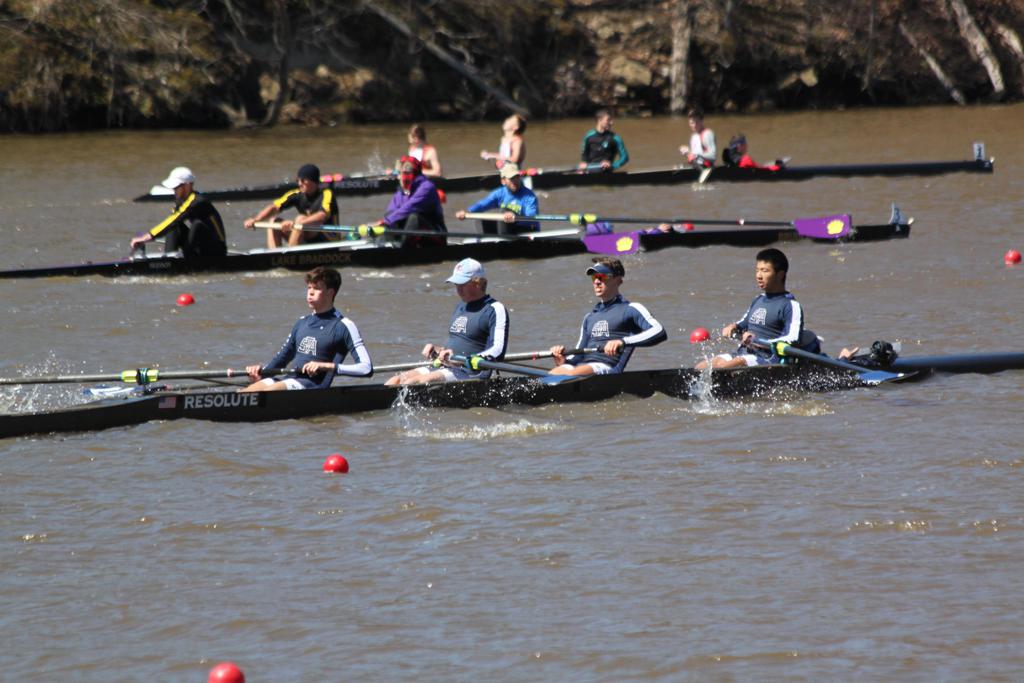 Only the first four races took place at the Walter Mess Regatta before the remaining races were cancelled due to bad conditions. Enjoy these photos from the STA and NCS freshman and four races.

Tip: Click the "maximize" icon on the slideshow to your right to see the photos larger.

CONNECT WITH US ON SOCIAL MEDIA

What's great about this sponsor?